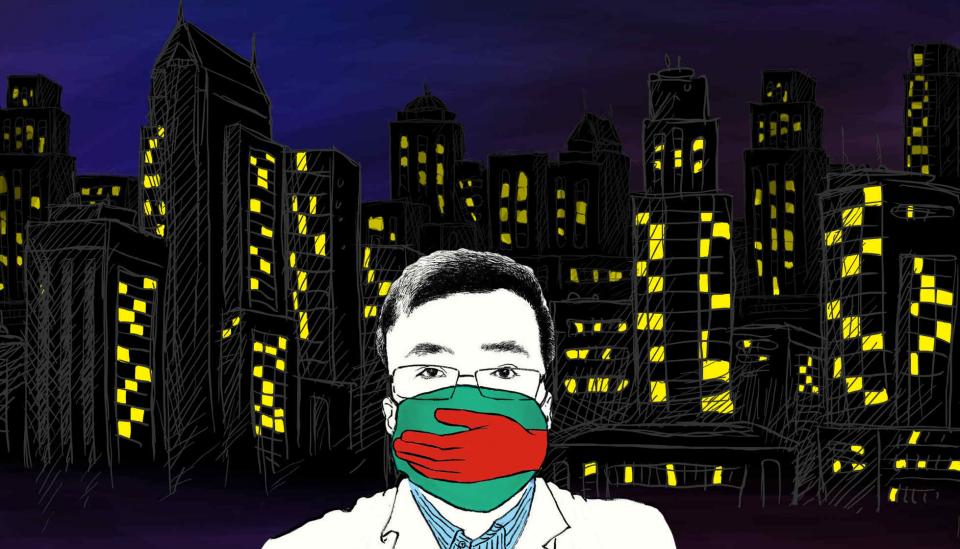 This is certainly not a radical critique but I publish this as yet another example of growing totalitarianism, this time within the medical world,  as an example of increased repressive actions on the part of the dominant forces of medicine in France. As Macron said, ““I think that in the country of the Enlightenment and of Pasteur, we need to stop having kinds of permanent debates on facts or scientific truth.” (here).

Because of this blog, I am the subject of a complaint from the Conseil de l’Ordre [Council of Order of Doctors]- , which apparently wants to disbar me. You can find the complaint here. Having always scrupulously respected the Hippocratic oath throughout my career, it seems that this is no longer the case and they want to stigmatise me. Apparently freedom of thought, freedom of expression, defence of treatments that one thinks are better than those proposed by others, debates, legal actions with the authorities, all this is forbidden to doctors. What about the freedom of prescription, the independence of doctors, the basis of quality medicine?

When I was first summoned, I was not told precisely what I was accused of, nor was I given reasons in this letter. You know that I always base myself on facts, the Order does not. No example, no sentence, no note is cited so that I can answer and defend myself. It is an accusation without proof. It gives me the impression of an order from on high, I was asked to be silenced, the Order complies, without having found anything concrete.

Irène Frachon, the whistleblower for Mediator, who saved thousands of lives, reported a request from the Medicines Agency to the Council of the Order to shut her up – we are in the same situation. However, there is a slight difference, as my fault was less severe: she was attacking an authorised drug, whereas I am only asking that a drug be authorised, and thus that an attempt be made to treat instead of doing nothing, whereas the Hippocratic Oath does not impose on us an obligation to succeed, but rather to provide the means.

The faults they reproach me for:

They claim I would “oppose recommendations made in the interest of public health by calling for the prescription of unproven therapies”. Sorry, I am not opposing recommendations (besides, a recommendation is a recommendation, not an obligation!), I am simply asking that another drug be included in these recommendations. I’m not calling for prescribing, I’m just repeating what the ANSM has said several times: “doctors, you can prescribe, you have the right to do so, provided you respect certain legal rules”, rules that I have systematically repeated, with links to the legal texts in question. The law, nothing but the law, gentlemen of the Order. These are not therapeutics, but only one, and what competence does the Order have to say that it is unproven? It is validated by a number of specialists and approved by a number of medical associations, orders and health agencies in the world. Is all this to be condemned?

“The studies cited do not demonstrate scientific rigour with an insufficient patient panel to draw reliable statistical conclusions.” You sound like the ANSM, which only takes the smallest, most criticizable series, and which I have criticized, ignoring the others. What about Carvallo with 1200 caregivers? What about GTFoods with 12,000 subjects? What about Mexico City with 233,000 cases? What about the 56+ studies (half of them RCTs) with nearly 20,000 cases? I have read them all, I am not sure that my accusers have read any of them, knowledge cannot be decreed (Decree of December 2020 concerning the Order), it is acquired. What about the ten or so meta-analyses?

What about the studies done for Remdesivir? For Bamlanivimab? What about the Mehra/Lancet study, or the latest Jama study? Has the Order lodged a complaint against those who have put them forward? It is however more blatant than those I quote!

Yes, we can debate and it is a real debate. Yes, we can discuss, and I have done so with the ANSM to explain my opinion. Yes, we can discuss with the Minister and I did so recently, it is not only legal, but a duty. Yes, American doctors have been invited to present these same studies to the American Senate, but no, the debate for the Order is not authorized, it is a condemnable fault, and I will be condemned (only one non ordinal judge in this court of exception where one can be judge and party), and will not have the right to good faith or error, as in a justice worthy of the name.

In my posts, I always give all the sources, all the opinions so that the reader can make up his own mind. When I quote and give my opinion on the ANSM, I always give its full opinion and my own. When Prescrire gives its opinion by quoting studies, I give that opinion, I give mine (is that forbidden? a mistake?), and above all I allow the reader to make up his or her own mind having heard both sides of the argument and having access to the studies in question with links. This is called an informed debate, which the Order refuses to allow in favour of one sole thought and obscurantism. Readers are not fools!

Has the Order found a single lie, a single error, a single manipulation? It does not quote anything, because it cannot do so. These accusations are vague, not based on precise facts, on which I could discuss, respond and defend myself. There is no defence possible without precise facts that can materialise a condemnable fault. Freedom of thought and freedom of expression are faults for the Order, for want of a better word.

“The blog of Le Quotidien du médecin, a medical journal, is accessible to the public?” – is this my fault? Is it a fault? Apparently the Order is blaming me. And what about the public? Don’t they have the right to debate?

Icing on the cake, finding nothing else concrete: “Considering that Doctor Maudrux, a specialist in urology, does not provide proof of his competence in infectiology”! Let’s skip the fact that I was not asked to provide this evidence, but is it only infectious disease specialists who have the right to be interested in Sars-cov-2? I point out to the College that I am also a graduate in general practice, should all doctors keep quiet, not be concerned with Sars-Cov-2? The Order seems to be unaware that Pasteur was not even a doctor, and yet…! That Véran [SF: France’s Minister of Health] is a neurologist, and yet speaks out on Sars-Cov-2. Does he also know that Mrs. Vaccine at the WHO is a psychologist, not an infectiologist or epidemiologist? As for Michel Cymes, who talks about everything on television and in magazines, why is he not prosecuted because he is not an ENT specialist [SF: the medical-surgical specialty devoted to abnormalities of the ear, nose and sinuses, throat and neck. It also deals with hearing, voice, breathing, smell and taste, balance, and facial aesthetics]?

Does the Order know that 80% of a urologist’s time is spent on consultations, which are extremely varied? I have had to treat many viral and bacterial infections, and I have fought all my career against laboratories that badly influenced general practitioners, passing off urinary antiseptics as systemic antibiotics, leading to a number of recurrent and chronic prostatitis and epididymitis. A bad anti-infectious treatment at the beginning leads to chronic complications, just as not treating Covid at the beginning leads to 20% of chronic pathologies called long Covids, we are in the same situation. I would also add that, having performed some thirty kidney transplants, with my nephrologist friends, I have acquired some notions of immunology. Finally, when I was elected President of the Caisse de Retraite des Médecins, I had no competence in pension matters, and the Order was able to see that I had succeeded better than others, and that 20 years later, the fund was cited as one of the best managed in France.

The Order is moving away from the medical debate, from the hunt for treatments for a severe disease, to a witch-hunt. We are a long way from the Hippocratic oath, which it flouts by restricting the search for the best treatment, but also from human rights. I would like to remind you of the statement made by the UN Secretary General at the opening of the 46th session of the Human Rights Committee, deploring the fact that the Covid-19 epidemic is being used by certain countries, which he did not name, “to silence dissenting voices, to abolish the most fundamental freedoms, to silence the independent media and to impede the work of non-governmental organisations”. Amnesty International cited France as one of the countries that “in the name of the fight against the coronavirus are carrying out unprecedented attacks on freedom of expression. They take the form of relentless censorship of anything that is not the official doxa, including on social networks, but also of professional sanctions. ” The Order is openly the instrument of these actions against doctors.