AGAINST MANDATORY VACCINATION AND ITS CRUSADERS

by the Assembly against bio-power and confinement (which includes TPTG), translated by TPTG 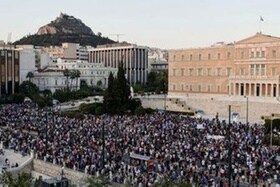 On Wednesday afternoon of 14th July, the people gathered in Omonia square began to move gradually from the square to Stadiou St. At first it seemed that there were no more than 1,500 people in the square, but, as usually happens after a demo has started, it was revealed that they reached 4,000-5,000. A lot of youth, families, well-off people but not necessarily posh, a mix of shopkeepers and workers. (According to some information, the initial call was made by a right-wing Facebook group called “Shops without a graft”). People did not seem to have much experience of demos. However, the well-known crackpots were not present (priests, nuns and others who had participated in the demos against the Prespa agreement, had already gathered in Syntagma Square and were waiting for them). You could see some muscular chavs, a few Greek flags (you could not see more than 10) and 2 improvised spray banners (“No to mandatory vaccination, we want freedom”). From the beginning, there was excitement among those gathered about the size of the crowd (many took selfies with Omonia in the background, so that one could see the main body of the rally), enthusiasm expressed at the beginning of the demo with massive applause and shouting, but then there was no particular excitement: 2-3 basic, nationalist, “anti-fascist” slogans (“Greece, Greece”, “fascist Mitsotaki, resign!”, “Down with Mitsotakis’ dictatorship”, “Keep your hands off our children”+ the national anthem). It would not be an exaggeration to say that we witnessed the birth of new right-wing and far-right mini-parties, a revolt on the right, on the basis of an existing social issue that large sections of communists and anarchists refuse to recognize as such. In the Syntagma square next to the Christians there were the Pro Patria neonazis,  lined up in military style. At the lower part of the square there was a small crowd gathered under the banner of Contra Dystopia and 4 other democratic, anti-fascist organizations against “discrimination and bioterrorism”. Here they describe the gathering from their own point of view and how they were attacked by the fascists of Pro Patria

The truth is that a large part of the anti-authoritarian/anarchist milieu and the left as former consistent adherents of lockdowns and now ardent crusaders of the vaccination movement, not only keeps silent about the issue of mandatory vaccination and its consequences for the working class, but also finds it a lot more interesting to eagerly deconstruct the term “health apartheid”, to idolize science, technology and the technocratic discourse as forms of capitalist relations, to identify any critique of these forms with “irrationality” and “obscurantism”, to do “fact-checking” of any critical approach to state propaganda for the new vaccines in an obsessive way, to relativize and ridicule any reservations/reactions/resistance, to downgrade a social issue to an “individual choice” by downplaying the gigantic dimensions of the state campaign which they legitimize, to be indifferent to the divisions and commands imposed on work and social life. By renaming individual responsibility as social responsibility, they urge people to faithfully follow the measures imposed by the state in the name of some vague “solidarity” and “social conscience”.

That is why a call from the left or the anti-authoritarian/anarchist milieu would not gather so many people. We say this because we consider mandatory vaccination as the latest episode of the bio-political management of the pandemic, against which the resistance has been minimal throughout the pandemic.

Mandatory vaccination is yet another (emblematic) measure of the imposed “state of emergency”, the continuation of lockdowns, fines, the capitalist ideology of individual responsibility, the reduction of state reproductive health expenditure, the reduction of wages and the increase in redundancies, by other means. Vaccines are currently the cheap and advantageous solution for capital to the issue of maintaining the health of the labour power under its command. Foucault’s analysis of bio-power is well known: all medical and other disciplining anatomical-political and biopolitical techniques aim to increase the health and the productive capacity of the labour force, the long duration of working life and the vigour of soldiers in the service of the nation. This does not mean, however, that investments in the reproduction of labour power must also be expensive, that is, harmful to the profits of capital, particularly at a time when the permanent crisis of capitalist relations requires a large amount of devaluation of productive and reproductive capital. Hence, the cheap solution of vaccines, which on the one hand are launched as a panacea for the pandemic, on the other hand turn the public debate on the satisfaction of proletarian needs away from the necessary, under the control of its users, support of health services under the control of their users in general; in financial terms this would require an increase in the taxation of capital profits and in terms of its content it would require a practical questioning  of the alienating capitalist form of medicine.

The left (and a large part of the anti-authoritarian milieu) mutter some objections to the lay-offs, but having prioritized adherence to the state “safety measures”, such as lockdowns, masks, social distancing measures, all these vaccines of dubious quality and safety with extraterrestrial names, etc., they do not call for any resistance to mandatory vaccination. As they did not call for any resistance to distance tele-learning, remote tele-work, the months-long confinement that led 1/5 of the population to depression, to the systematic violation of individual, social and labour rights. Not to mention that in many cases, such as that of distance learning, it has already spearheaded their violation, allowing the state to turn irregularity into law.

However, the repercussions of disobedience to government measures of mandatory vaccination of public and private sector workers in the context of the steady enhancing of management rights from March 2020 onwards could be nightmarish. The blackmail to be imposed on both public and private sectors workers who do not choose to be vaccinated has already begun: in the public sector they try to circumvent even the standard “disciplinary” authorities through fast-track procedures so that workers could be directly sanctioned with forced job transfers or even layoffs. Just imagine the consequences if such a situation gets generalized, i.e. in the case of refusal to do distant learning. Already with the extra powers given to the head teachers of school units those teachers who resist the evaluation process are about to have their salaries cut off! Whoever refuses either getting vaccinated or getting evaluated or something else later on … will risk their salary or their dismissal!

At the same time they intend to introduce redundancies without compensation in the private sector, if a non-vaccinated employee is considered to cause harm to the profitability of the company. And before they fire us, they will initially suspend us without pay just in case we show some signs of cooperation.

When the working class is faced with a problem that needs to be solved immediately, such as health care (and we do not mean simply covid-19) and the protection of its direct and indirect wages, it must rediscover its political and intellectual weapons, the life forms that will keep it ready to fight. We, the rank and file, should put pressure on the unions to take decisions against mandatory vaccination and to support those who choose not to be vaccinated, and at the same time to form a non-corporatist, outside the unions, proletarian community of struggle that not only will stand in solidarity with those who refuse mandatory vaccination but which will also break these divisions in the context of the total denial of the state management of the pandemic.

If the relevant announcements of the unions follow the logic of POEDIN, as it is reflected in its recent announcement, “The medical staff participates en masse in the vaccination process, but it is victimised with inaccuracies and distorted data. We are against the mandatory vaccination of health and care workers because it violates constitutional liberties and individual rights. All health workers will be vaccinated by use of persuasion. Coercion or imposition of disciplinary measures lead to the opposite results “, then we are screwed.

With similar “persuasion” measures the teachers’ unions led their members to compulsory distance learning! On the other hand, fortunately, the decision of the Workers’ Union of the AHEPA hospital, which opposes mandatory vaccination and the penalties of dismissals and salary cuts, calls for a work stoppage on the issue. (https: //www.grtimes.gr /…/ poedin-4ori-stasi-ergasias …)

So, let’s keep clear away from pseudo-imperatives like the ones put forward by the current pro-vaccination demonstration of “struggle” by the CP which allegedly calls for measures to support the public health sector but at the same time demands a “global program of free public vaccination” – as if the government offers something else!

Let us break the divisions defined by the state and capital even with individual risk, by refusing to demonstrate certificates of illness and vaccination (those of us who were vaccinated for individual reasons) in order to get access to places where the unvaccinated are not allowed to enter, in solidarity with them (as a form of a consumer strike).

Because only a real STRUGGLE, which will attack the state management of the pandemic as a whole and in all its forms, distance learning/remote tele-work, constant lockdowns, violation of labour rights under the pretext of the pandemic and the medicalization of social issues can create real ruptures leading to proletarian self-determination and the questioning of the dystopia we have been experiencing for 1½ years now.

THIS WILL IMPROVE OUR HEALTH!