The title is a detournement of  a common everyday French expression “The future belongs to those who get up early”, roughly equivalent to “The early bird catches the worm”.  Perhaps a more anglicised version would be “The early bird snatches the storm”

The future belongs to those who rise up early

The global security law in France is pretty much identical to the Mordaza law in Spain and it has the same objectives: to control, break up and repress social movements, acts of rebellion and their self-organization, to drive out the exiled. The Mordaza law was passed in Spain in 2015. For 2 years the socialist Pedro Sanchez and his ally Podemos  promised to repeal this law but it has only just been reformed – and only marginally – by the Spanish constitutional council and remains broadly unchanged.

The reactions of the Left against the latest security law in France are still part of the same rightsofman-ist postures that it adopts when it is in opposition. The same goes for the Socialists and Podemos in Spain. We know how they used it when they came to power… France Insoumise, the Communist Party, the Socialist Party, the New Anti-Capitalist Party – all the organizations which represent a pretension to “anti-capitalism” which have nothing to do with a real opposition.

As long as individuals feel the need to be represented, they are always faced with the fact that the representation they choose is out of their control.

Long live the window smashers! Down with the violence of the economy and its police!

Every year 500 people die at work in France, the majority on construction sites. Lack of money and lack of a future kills even more out of desperation. The destruction of life on the planet is directly linked to commodity society. The police are killing or seriously maiming people all the time. Their essential function is to defend commodities and the commodity system – the bourgeois economy. So – it’s a secure system, then? But the media, the ideological weapon of the ruling class, talks about the insecurity and violence of the window-smashers. So the media support state violence, the class society whose base is very violent. And all the people who cry about a broken billboard have lost all sense of priority – they’re completely colonized by mainstream ideology. But breaking is not enough. When the struggle becomes ritualized into simple clashes with cops or smashing things up, while all of this is necessary, it is certainly not enough: imagination and criticism are self-censored to the benefit of the familiar for fear of the unknown. But inspiration doesn’t come with the wave of a magic wand. Despite changing circumstances, despite our extremely restricted vision of a potential future, we cannot avoid focusing our interests on history and on current struggles, on their limits, their successes and failures, on their strengths and weaknesses: other possibilities exist. Repeated clashes are as likely to get us arrested, sent to jail, or have our skulls smashed as something innovative and original for this epoch, so it’s no safer than even trying something new. And trying something new is essential if we don’t want  struggles to turn around and around in smaller and smaller circles, involving fewer and fewer people.

According to Neocleous 2000, Bittner 1990 and Waddington 1999 – sociologists of the American police – only 6% of a cop patrol’s time is spent on incidents ultimately defined as “criminal”; and only a very small number of criminal offenses are discovered by the police themselves. So what are the police actually doing? In summary, this group of armed, lower-level government administrators trained in the threat of physical force or its scientific application helps solve administrative problems. Police officers are bureaucrats with guns. They are the active face of the state monopoly on the use of violence. The popular assumption that the police are there to fight crime, especially violent crime (an assumption endlessly reinforced by movies, TV shows, and news reports) is largely a myth that hides the fact that most great crimes are those that the police protect – the crimes of the ruling class.

An example of a city without cops

During the 2011 uprising in Tunisia, the 15,000 residents of Thala evicted the police. After the death of a young man, his friends were consumed with anger. One of them, filling his motorbike with petrol, launched it against a police station, causing a fire which forced the police to leave town. On February 17th, Nemri Bassem, a mechanical engineer unemployed since 2004, occupied the police station and remained there, claiming his right to work, an action which was just one of hundreds of actions carried out in Tunisia by the Union of Unemployed Graduates. Nemri was not alone. Many young people joined him at the police station, transforming it into a place where one could listen to music, play cards and talk about revolution. The young people took turns taking care of security. Delegates from the Committee for the Protection of the Revolution controlled the city and “justice for our dead” was its main demand. They submitted a list of those involved in the killings (the forces of so-called order, the order of commodities), and for 17 days in March, they staged protests to demand the imprisonment and trial of these murderers. They refused to recognize central government. The police station was transformed into a social centre. It lasted 6 or 7 weeks before the state crackdown, but it had been a true moment of liberty, equality and fraternity.

Below not produced in leaflet: 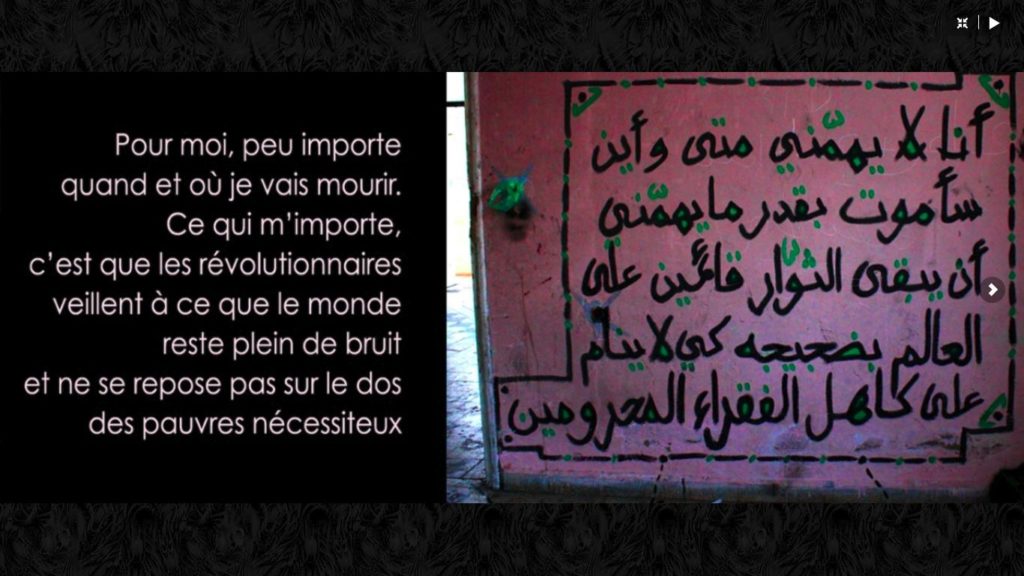 “For me,  it doesn’t matter when or where I’m going to die. What’s important is that revolutionaries make sure that the world remains full of noise and does not relax on the backs of the needy poor”