There’s also a Lithuanian translation of this text published 18th June 2014, a complement to “brazil against the world cup” …the opium of the people What began a long time ago as a primarily working class sport played and developed on the street or other unsurveilled places by the poor has now become a method of  turning those  workers into spectators, controlling those streets and places and making the life of the poor worse.

The seemingly endless spectacle of sport has as its base the repression of  communities of struggle.  In the wake of the repressions of class struggle communities from the mid-80s up until just a few years ago,  football increasingly became the surrogate “working class” connection to the world; the participatory compensation and consolation for the repression of these struggles, for the repression of a real connection with history.    People pay exorbitant amounts of money to travel to and consume these events in order to say, “I was there!”. An ersatz history mediated by sports heroes and team support clothes etc History as a commodity..History as conspicuous consumption.

But with Brazil the contradictions of the show are becoming transparent:  sickness and shacks for the poor – health and mansions for the rich. The commodity spectacle has its priorities, and investment in image and diversionary entertainment has become more profitable than production of  the bare necessities. Today, the rulers present method is a slight variation of the standard “bread and circuses” method since Roman times:  geneticallly modified crumbs and football played by millionaires. John Dennis (see this), a radical miner during the strikes of the 70s and 80s, said once to me that when he was a teenager he was a Sheffield Wednesday fan. But he always felt that it was a role he felt obliged to play – to put on a show of joy when the team won, to be sad when they lost; it was something he felt obliged to play as an unwritten rule  of his friendship with the other fans.

Nowadays that role, the face painted in national colours that the fan puts on,  most obviously supports the terror of FIFA and the Brazilian cops. “We know this world is shit – let’s just enjoy what it’s got to offer”  shrugs off critique and critical self-reflection with  a conventional mixture of naivety and cynicism.   A taxi driver In Fortaleza, said on June 16th “There has been some mindless violence with the protests, but now it’s time to enjoy soccer.”  (here). The brute  violence of the cops and the state and all the forces supporting this sick show turns against the conscious violence of the opposition to dismiss them as “mindless killjoys”. The desire to belong, separated from the struggle for a community against this world, becomes simply a suffocating duty to conform.  It’s  expressed in the form of the fans’ exaggerated pretence  of brashly affirming what they have been told must be affirmed.  Regardless of what people genuinely feel,  invent or initiate, one must keep up appearances. That which appears on Facebook is good, that which is good appears on Facebook. When people dress up in   colourful masks and funny clothes and take endless selfies, life and the self has grown old and cannot be rejuvenated with dazzling colours. It can only be evoked as a photo posted on the internet. The greatness of  this costume drama increasingly flourishes at the dusk of life, and the impending midnight of the planet.

“…a social relation among people, mediated by images.” 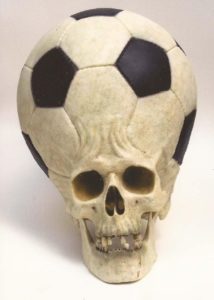 This banal display quite consciously supports the positivism that capital tries to turn into  an obligation in the face of all this positivism’s very evident miserable negative consequences (occupation of the favelas, evictions, gentrification,  intensified poverty and sickness, sex tourism, tear gas and bullets, deaths on the construction sites,  murder of many of the  homeless, etc), which the movement of proletarian subversion in Brazil over the last 12 months has made it impossible to not be aware of. We can hardly blame FIFA and the rest of the Borgiasie for acting in   their own chronicly sick brutal class interests –   but the spectators who want to remain spectators, the  willing collaborators,  those complicit in their   own misery – these are the cowardly enemy within, always playing safe, always faking it, always avoiding the depths and staying on the surface, always flowing with the tide until it eventually drowns them. The World Cup is a subtler version of the Thai ruling class’s method of  recent hierarchically organised forms of leisure consumption:

“Are you in need of a pick-me-up? How about a free haircut or hot meal? A dance show by women in PVC miniskirts? Perhaps a chance to pet a pony?

All this – and more – is now available to you courtesy of the Royal Thai Army’s “Happiness” campaign, which is staging free festivals across Bangkok to “bring back happiness” to the Thai public following last month’s military coup.

A bizarre combination of an army-controlled street party and a music festival, the “parties” have been taking place in parks and squares, where the public is showered with free food and drink and given an opportunity to watch the army sing and dance — and take selfies next to trussed-up soldiers….

The campaign is by order of Gen Prayuth Chan-ocha, who took control of Thailand two weeks ago in a military coup ….Prayuth has said the coup should be celebrated as an opportunity for Thais to feel good after a long stretch of political in-fighting left the country deeply divided. “The Thai people, like me, have probably not been happy for nine years,” he said last month. “But since May 22, there is happiness.”

The goal of the spectacle of the World Cup, as of the leisure spectacle as a whole,  is to be seen to be above politics – it insinuates itself into a community  of false friendship mediated by what this society has defined as “happiness”: “There’s a predominant climate of fraternization,” Rousseff told reporters in Brasilia late yesterday. .Rousseff said the mood shift reminded her of when she watched the 1970 World Cup while imprisoned by Brazil’s military dictatorship. The advance of Brazil’s national team in that event began winning over fellow inmates who had refused to support the squad because they expected victory would only strengthen the military regime, she said. “Brazil’s team represents our nationality,” she said in an e-mailed statement yesterday. “It is above governments, political parties and interests of any groups.” (here) . Even prisoners under a brutal dictatorship can appreciate the positive value of the nation, and football as its ambassador, as long as they give up their silly notion that football strengthens military regimes (and certainly not then to go on to recognising that these militarised regimes can take both a dictatorial and democratic form.). But in being overpowered by the show of football and its ideologies of fraternisation, even a prisoner can give up his angry point of view and be turned into the pliable  self that enables this society crush people more easily.

Given this extreme fragility – that of each individual’s sense of self in a world that destroys all individuality and the community of solidarity that enables individuals to recognise each other, positive affirmation of situations totally outside of the individual’s participation/control becomes a pathological need, a desperate way of connecting with someone, in this case  through sport (though  cultural mediations are usually just as alienated). The fans try to delude themselves into believing they are somehow participating in all the decisions by acting like would-be managers of “their” team: “we should put X in Y position and concentrate more on Z, and that bastard Q should have been sacked years ago”, blah blah blah. They compete with each other by showing off their expertise, learning all the minutae of the history and gossip  of their and their opponents’ teams. Community by proxy, a vicarious form of decision-making, the only  kind capital  produces, and produces en masse the more genuine community and the taking of significant decisions it represses. All that frenzied passion and exuberance towards the unpredictable unrehearsed unscripted suspense of the game is all focussed on  the pitch, a mediation totally outside the control of the fans, whose eyes never meet.  As always the spectacle – whether of sport, politics or culture – is a substiltute for lived reality – the only game really worth playing. This is the game which  is everywhere repressed with distractions, lies and stun grenades: the unpredictable unrehearsed unscripted suspense of the revolutionary adventure. 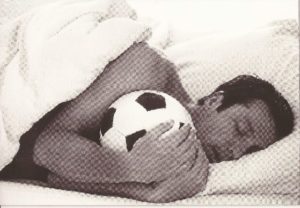 PS Of course, given  the general conditions of acute isolation, people find pretexts for getting together with people. And sometimes fans go beyond their allotted role as fans –  for instance here, here and here.