(published here for information’s sake, certainly not for any significant social critique)

What about this variant, which we are told is more contagious, more or less nasty, affecting only the unvaccinated, or both the vaccinated and the unvaccinated? It would be 1,000 times more contagious according to our minister, who is increasingly in the habit of quoting figures that mean nothing or are false, such as the 96% of non-vaccinated positives. 1000 times more contagious? At this rate, in 8 days France is 100% contaminated! And great, only the non-vaccinated will be affected since the vaccinated are not affected, which is only fair for our leaders, that solves all the problems! Not so simple, because the reasoning and the figures are wrong.

What is the reality? Two weeks ago, I wrote that it was probably more contagious, and probably less nasty, and that a natural contamination, more efficient and more durable than vaccination, was perhaps possible. Let nature take its course. I also wrote that we still needed a couple of weeks to be able to confirm it, it is almost done (even if there can always be a doubt with this damn virus). Facts, nothing but facts:

First point, a more contagious delta variant? Yes, it’s obvious, it has rapidly taken over everywhere, from 50 to 90%, it’s increasing every day. No need to flood you with examples or curves, no one denies it, no one needs to hide these figures. We are fast approaching the 90-100% variant delta, before the next one. This seems to give reason to those who, from experience, tell us that it is not the same epidemic, but successive epidemics, with different viruses, probably less and less virulent, to end up after 2-3 years with an endemic for a few years, with a variant virus that comes out here and there, as for seasonal flu.

An obvious example is the Spanish flu. More than likely with a very similar virus, a much more deadly epidemic than the current one. It disappeared gradually, no longer exists today, and without the need for treatment or a vaccine. Tomorrow we will be told that the disappearance of the current epidemic is thanks to the vaccine, whereas it is a natural phenomenon that has been recurring for centuries.

Does this variant only affect the unvaccinated? Apparently this is the case in only one country in the world, ours. Our minister says so, the press does not release any figures other than what he says, so it is the truth. Elsewhere, it seems that this is not the case, we must have a special climate. The countries that have vaccinated the most in the world are still facing this new wave, sometimes even more than the others. If it only affected the unvaccinated, it would not be the case. I’ve talked about it, with figures, in previous posts, this is the case of the Seychelles, Gibraltar, and many others, but also of larger and well-monitored countries, such as the United Kingdom or Israel. In these two countries, an average figure of 40-50% of infected people are vaccinated. As the rate of vaccinated people is around 50-60%, we can perhaps say that this variant affects both the vaccinated and the non-vaccinated, so it is not far from 50/50.

We are trying to hide it. Sir Patrick Vallance, the UK’s Mr Solomon, got things mixed up by trying to play down the facts, declaring in a joint press conference with Prime Minister Boris Johnson that 60% of people newly admitted to hospital had received 2 doses, only to say on twitter that it was a mistake but 60% of the non-vaccinated. In Israel, it’s clearer: according to the ministry, 5 days ago, out of the 143 hospitalised, 58% were fully vaccinated, 3% partially, 39% non-vaccinated. If we look at the new cases, rather than hospitalizations, since the beginning of the wave in May, 40% of the new cases are vaccinated with 2 doses. 1% of new cases had had covid before, having acquired antibodies through the disease (72 cases out of 7,700 infected since the beginning of the wave, compared to more than 3,000 vaccinated with 2 doses). This does not mean that the disease is 40 times more protective than the vaccines, because it must be taken into account that there are fewer former patients than former vaccinees. However, the country has 860,000 cases (add healthy carriers), i.e. 10% of the population, compared with 60% of those vaccinated, which brings the ratio down from 1 to 40 to 1 to 7. Immunity to the disease appears to be 7 times greater than that of the vaccine. I will therefore retain an average figure of 40 to 50% of vaccinated people in the new cases, which is not insignificant for judging the effectiveness of a vaccine, which is put forward to stop this variant!

Let’s add that the vaccinated are no less contaminating than the non-vaccinated. Few people say this in our country. On the other hand, look at what the President of the Order of Physicians in Rome says. Unthinkable in our country, with an Order under orders.

The less virulent delta variant? Now, with more hindsight, we can confirm this. With more hindsight, because there is a time lag, on average 15 days, between diagnosis and death (if that is the marker we use). The British started their third wave on 24 May (first day of re-ascension of cases), i.e. 2 months ago, which is more than enough time to judge the damage caused by the wave. Here are the superimposed curves of new cases and deaths in this country for the last 18 months. 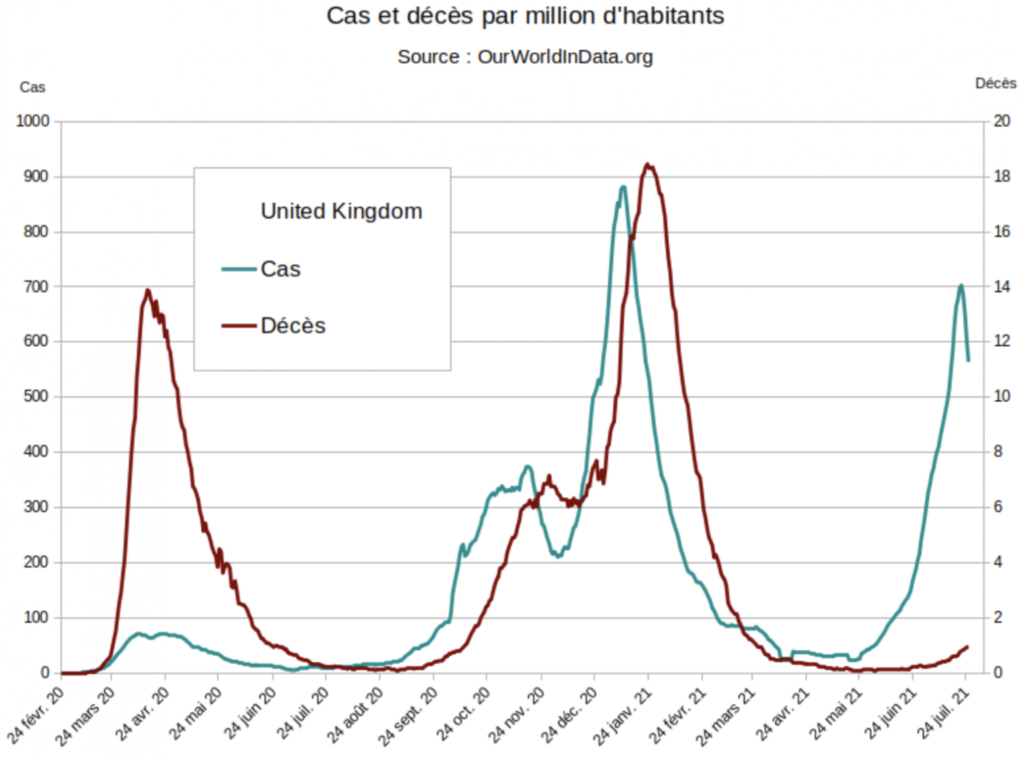 Cases and deaths per million inhabitants

As a proportion of the number of cases, these curves show 15 times fewer deaths with the delta than with the previous variant. Another important observation is that the British began the end of the wave on 20 July, i.e. 5 days ago, and deaths should decrease in about ten days. The end of the wave, without having vaccinated more, and having reduced all the accompanying measures since 19 July. With the opposite of what we are doing in France, everything is going well with the delta in the UK. All this has been visible for a month, except to our leaders, our elected representatives and our press.

Israel follows with a one month delay, the same findings on cases and deaths. 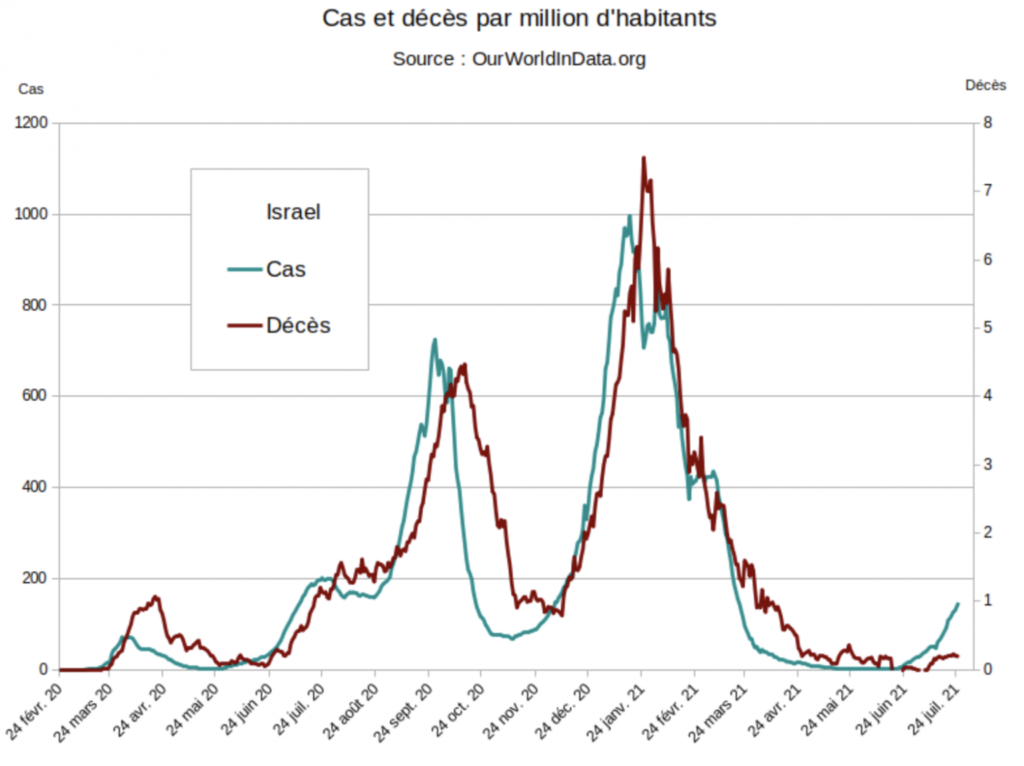 Same thing in France, our wave started exactly on June 28, i.e. 4 weeks ago. Hospitalizations and deaths should have started up again 15 days ago, whereas they continue to fall or are in a low plateau (should rise again, in a proportion 15 times lower than in previous waves if we follow England and Israel). If this is confirmed, the result in 15 days. I would point out that 15 times less is less deadly than seasonal flu! 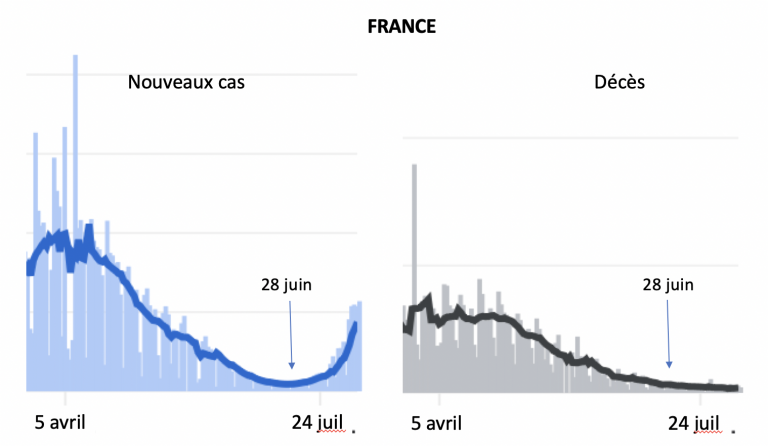 In the USA as in France, they try to minimize this situation, but the findings are the same as elsewhere, even if presented differently. There is a very interesting table in the New York Times (you won’t find it in Le Monde or Le Figaro), giving by region the % of delta variants and hospitalizations: the more deltas you have, the fewer hospitalizations there are! When there are only deltas, there will be few hospitalisations. 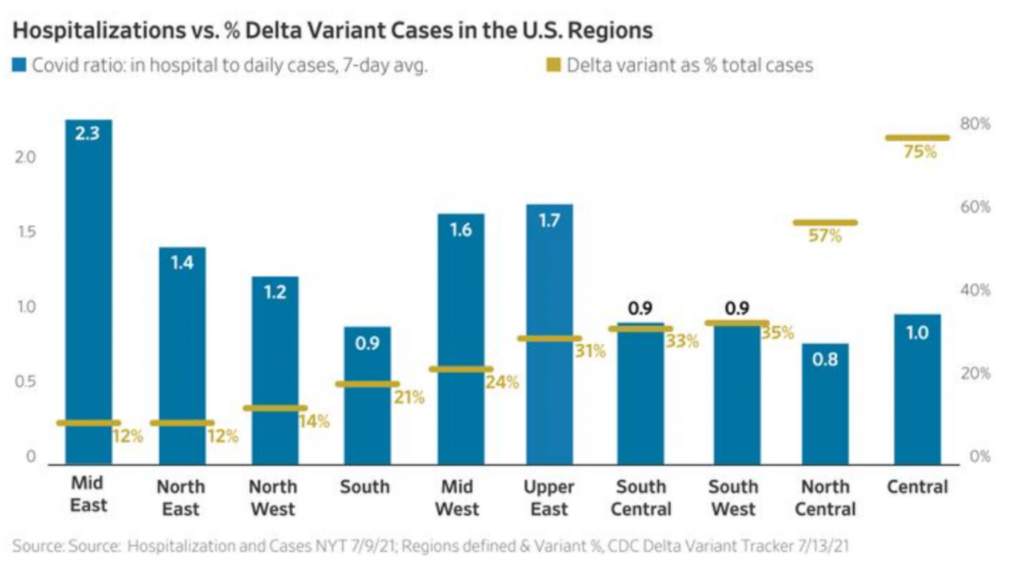 Delta variant and treatments? If this variant seems to be very moderately sensitive to vaccines, what about medical treatments? India got rid of this home-grown variant very quickly, and the wave announced by all our newspapers as a coming catastrophe did not last long. In terms of intensity, the number of cases per million inhabitants was half that of France. This was probably due to the only weapon they had: ivermectin. The fully vaccinated represented 3% of the Indian population at the time of the wave. 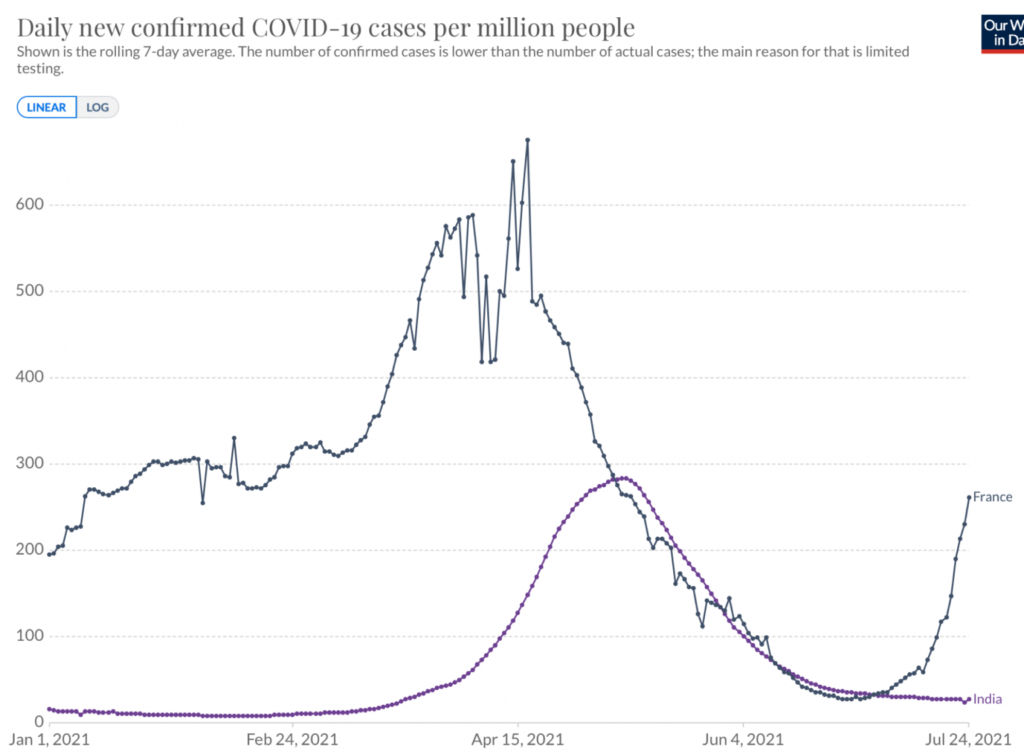 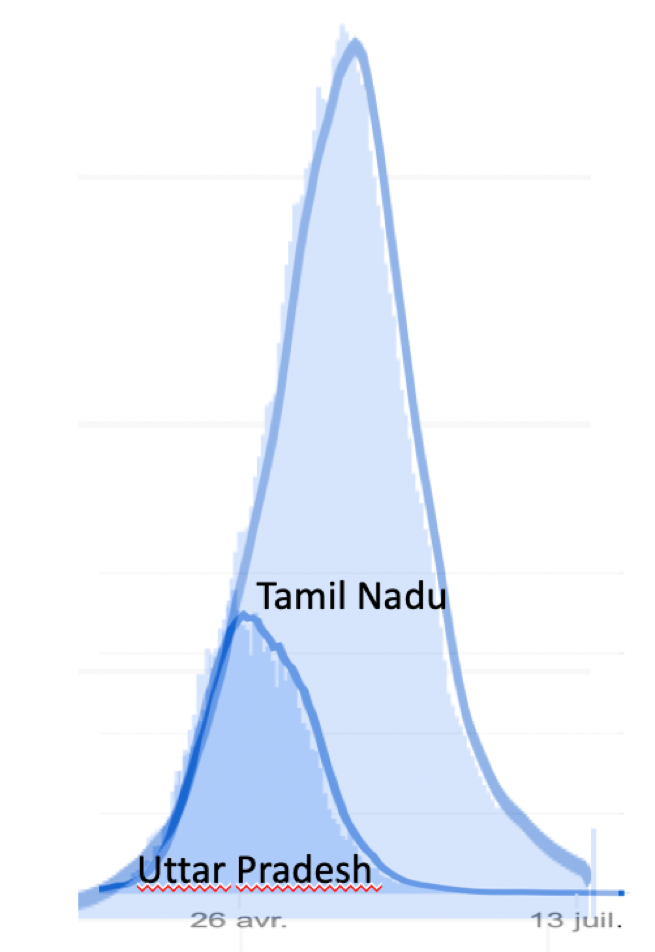 Conclusions on this delta variant:

2) Vaccine moderately effective, does not protect so much from severe forms.

3) Effective treatments. The figures say so. Does this deserve the drama we have been experiencing in France for the past two weeks, and which will leave its mark for decades to come?