I’ve been to most of the demos against the Pass Sani-se-taire [i] in Montpellier. They’re a bit of a ritual. You feel you’ve got to be there to make up the numbers. And then become a mere number yourself. Although the numbers are certainly increasing, these demonstrations are more demonstrations of incredible confusion and dogma than much of a serious opposition to growing totalitarianism. It is inevitable to be confused by the enormous contradictions of this virtually unprecedented intensification of an already irrational daily life. But we need to wade through the confusion rather than assert dogmas against opposing dogmas. As one of its more devastating effects, Covid has everyone digging their heels into quicksand, whether Covid-denier or Covid exaggerator, total pro-vaxxer or total anti-vaxxer, conspiracy theory or anti-conspiracy “theory”. Everyone falling into positions that disappear like mirages on approach. Everyone becoming more furious than ever that they’re right but adopting a right that proves wrong so quick, having sped round a delirious circle of lies, half-truths, truths and 1½ truths.

And it all adds so much to the wear and tear of daily “communication”. The tendency of people to monologue with their already well-fixed ideologies does not make for a good discussion of the contradictions and miseries that the present development of capital is imposing with increasing force. The ideology of unity is both a way of saying “shut up!” about our differences, and also a way of merely making “opposition” a non-violent spectacle. We need to develop actions that extend and go beyond the attacks on vaccination centres that have been happening throughout France at the rate of 1 a day since mid-July if we are to stem the growing horror driving people to madness or suicide: for example, some persistent sabotage of QR technology, wildcat strikes, occupations, riots, etc. We are not weak because we are divided but divided because we are weak, and getting angry about this mad future as well as significant differences is also part of overcoming weakness. Unless people fundamentally challenge their own complicity with hierarchical authority and ideological half-truths, we shall only help to dig our own graves by keeping us separate.

So let’s name some of the confusing ideas and shitty politics amongst some of the participants in these demos.

There are the obvious ones – like the Ligue du Midi, who gratuitously thumped some members of a moronic Leninist organisation (ARM/Combat) on July 24th. Both are organisations that attract abject admirers of authority and those with delerious power-crazed fantasies of leading the masses. Whilst ARM is just ridiculous and largely insignificant, the LduM are a genuine physical danger to anybody trying to develop some autonomous opposition to this world as well as to migrants, muslims and any other convenient scapegoat for explaining why we’re miserable.

But they’re not the only far right danger. Given the largely pathetic nature of the Left, including much of the extreme left and apparently “anti-authoritarian” far left over the last 18 months since the start of this suffocating Covid epoch, the Right have been the main recuperators of dissent, hoping to opportunistically gain recruits for their sordid anti-life politics. Their “opposition” to Macron’s authoritarianism, when they’ve always submitted to and supported horrendous authoritarian politics in different forms, their calls for unity when their whole politics involves racial divide and rule – all this is a sick joke. If one limits opposition to a specific aspect of the State’s power, one can invariably ignore the hierarchical forms that are embodied in those who aim to become the State (e.g. treating those lower in their own hierarchies as mere members – the arms and legs, but never the heart or head, something which the useful idiots lower in such hierarchies willingly accept). Fortunately some people on these demos are aware of the danger of these groups, and managed to confront Action Francaise on 7th August, forcing them to lose their stupid national flags and some other equipment.

It’s a pity not more people critique the presence of France’s national flag on these demos. Some pretend it’s the symbol of the Revolution of the late 18th century, as if it hasn’t been something that the bourgeoisie has invariably used, including in its territorial massacres in Vietnam and Algeria. You can’t separate a symbol from its dominant historical meaning – it’d almost be like saying the Swastika is just a religious symbol coming from Hinduism, Buddhism and Jainism. Macron too is happy to parade around with the tricolour. Likewise he sings the Marseillaise. On 7th August people singing the Marseillaise confronted by people singing the Internationale, though unfortunately they didn’t drown them out. National anthems show respect for the bourgeoisie’s property – the Nation. In this epoch, nationalist identity, though always an identification which connects you to your rulers or would-be rulers, is particularly submissive and unstrategic given the fact that the pass sanitaire is increasingly being imposed throughout the world. An international opposition is essential and borders are cages which keep us who have no control over our lives separate.

And then there are the conspiracy theorists. Let’s give them their due. Given that all criticism of the lies and mutual complicity between different arms of the ruling class (the media, the governments, the pharmaceutical industry, the WHO etc.) is caricatured as “conspiracy theory” it’s inevitable that many people would turn such a pejorative term into something positive. There’s been a massive intensification of lies that seems unprecedented, to the point where it is almost impossible to discern what is true, with experts changing their ‘facts’ from day to day, rather like in Orwell’s 1984, with what was said being put down the ‘memory hole’. Macron has called this so-called “health” crisis a war, and we know that in war the truth is the first casualty. Of course since the first world war, media lies have been used en masse to manipulate the proletariat, but this is a massive intensification of lies and irrationality so much so that the world seems to have leapt over the abyss into madness. But countering dominant madness with oppositional madness reinforces the very separations that the state and the ruling class want of us.

Such as reducing the development of this epoch to the Illuminati or to Soros and Bill Gates. But capitalism works not by conspiracy but by capitalising on the crises that are endemic to its dynamic development. Simplistic “answers” to the complexities of mutual capitalist interests between the State, private business and the professional liars of the media make these conspiracy theorists easy prey to right-wing demagogues who hope to use them for their future ambitions. Reducing questioning of the current Covid epoch to simplistic unnuanced answers makes such people as pliable as putty (see: Conspirouettes –  https://dialectical-delinquents.com/conspirouettes/). These Right-wing politicians will also lie intensely as soon as they get some margin of power (just as they lie today about the undocumented etc.).

One can see in the hostility towards those who are highly suspicious of the ARNm vaccines a development of a kind of racism. Racism operates within a nationalist politics which excludes people through its borders and is based on previous imperialist conquest and current capital investments in poverty wages in “Third World “ countries that force people to try to find a better life elsewhere. Foreigners are blamed for the misery, such as reduced wages, inflicted by the rulers and by bosses. Likewise those who aren’t vaccinated will be treated as lepers responsible for the continuation of state-imposed restrictions, even though being vaccinated doesn’t stop the spread of the virus. 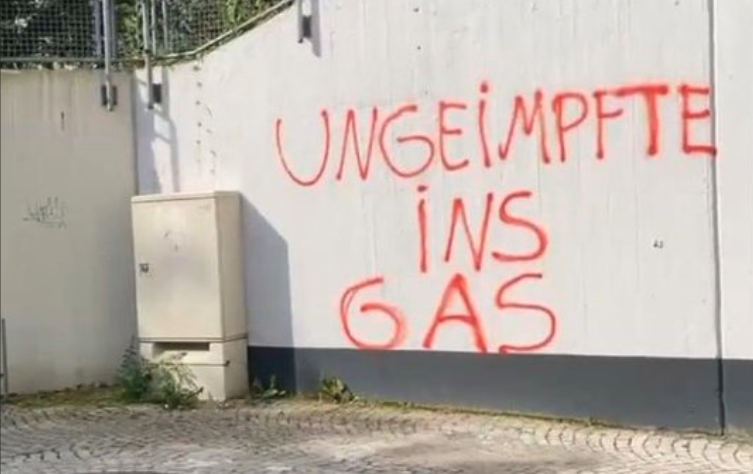 Part of the ideology of this developing opposition is to refuse to discuss the vaccines other than to say that we’re being used as guinea pigs because the vaccine companies officially admit that the 3rd stage of their trials won’t be reached until 2023. For fear of alienating those who’ve been vaccinated but are against the Health Passport, discussion of the potential disastrous effect of these essentially new ARNm vaccines is largely closed down. But given that even these companies admit that these vaccines at best reduce symptoms, that you can still infect others and that there are many who’ve been vaccinated who die to not discuss the vaccine in the name of unity is tantamount to self-censorship. Thus the fact that some dissident genetecists, epidemologists and doctors speak of possible long-term disasters caused by the ARNm vaccine (possible creation of a super-virus vastly more resistant to anti-virals, potential weakening of the cell structure, all the various accumulated side effects such as potential infertility, miscarriages, cerebral thrombosis, etc.) and that there are other well-tried antivirals (ivermectin, Artemis Annua, etc.) has to be avoided because “we aren’t experts”. As if an expert is someone whose opinion should be automatically accepted without question (and this also goes for the dissident experts also – Raoult, Perronne, etc). In fact, the pharmaceutical companies don’t particularly care if their vaccines work or not – the point is to accumulate capital, to make billions in profits, and in this pursuit reifying humans as guinea pigs is a logical step. The means – extending the vaccine to kids as young as three, forcing people to have a 3rd jab, etc. – is essential for this goal. The fact that a majority of people have accepted to be locked down and now have been vaccinated is indicative of the power of the spectacle that colonises people’s emotions and heads with an ideology to justify submission to fear. “Of all the passions, fear is the one that most assures submission to laws”, as Thomas Hobbes affirmed in Leviathan. Or as a survivor of the Nazi camps said, “The modern system of terror amounts to the atomization of the individual…depriving them of the psychological means of direct communication…because of the tremendous communications apparatus to which they are exposed. The individual under terrorist conditions is never alone and always alone. …Thinking becomes a stupid crime; it endangers his life. The inevitable consequence is that stupidity spreads as a contagious disease among the terrorized population. Human beings live in a state of stupor—in a moral coma. What the terror aims to bring about… is that people shall come to act in harmony with the law of terror, namely: that their whole calculation shall have but one aim: self-perpetuation. The more people become ruthless seekers after their own survival, the more they become psychological pawns and puppets of a system which knows no other purpose than to keep itself in power” (Leo Lowenthal, Terror’s Atomization of Man, 1946).

Then there are the pro-vaxxers who invariably refer to the smallpox or polio vaccines as if the ARNm vaccines have anything in common with these tried and tested standard vaccines (those who have had the conventional Chinese vaccines against Covid are still not allowed a Pass Sanitaire, because tried and tested vaccines do not make billions for Pfizer and company).

The main reason for the Pass Sanitaire – more important than helping Big Pharma accumulate billions, and in addition to the destruction of all health privacy and of the Hippocratic Oath – is the intensification of social control, of tracking and tracing and of intensifying acceptance of being permanently surveilled “for our own good”. Which, surprise surprise, is for the good of our rulers who, should we decide to revolt as things get invariably worse, will have vastly intensified their means of repressing such revolt. And got people to acquiesce in such repression. An English anarchist expression “War is the health of the state” has now become “ “Health” is the war of the state”.

Please note: there’s an error here; Leo Löwenthal was not a survivor of the camps – he fled Germany when Hitler came to power in 1933.