It should be clear that I am not  in accord with the ideological aspects of the content of many of the articles I link to.

India: new tongs for harassing individuals, that repulsive creeps find sexually attractive, whilst maintaining social distancing (doubtless “grab ’em by the pussy” Trump has already ordered one of these)

Resistance to new conditions of surveillance produced by the Coronacrisis?

Spain: Police in helicopter descend on lone beachgoer amid lockdown

Anyone who has to be in quarantine in Saxony and does not abide by it must now face severe penalties. The federal state has cleared almost two dozen rooms in psychiatric clinics, where the unteachable should be guarded by the police.

Anyone who refuses to order home quarantine in Saxony can be arrested in a psychiatric clinic on Thursday. The MDR reported, referring to a request to the country’s Ministry of Social Affairs.

The state government has cleared a total of 22 rooms in the psychiatric clinics in Altscherbitz, Arnsdorf, Großschweidnitz and Rodewisch, in which any refusers should be fixed. The police should guard them.

“It is important for all of our health and life that people adhere to the quarantine orders of the health authorities,” the broadcaster quotes the country’s minister for social affairs, Petra Köpping (SPD).

“If it should happen in individual cases that people oppose the orders, it is necessary to enforce the measures ordered by the health authorities. It is also possible to place these people in a closed part of a hospital with a judicial decision. ”

This initiative is covered by Section 30 of the Federal Infection Protection Act. It states that whoever does not comply with the relevant orders or who, based on previous behavior, assumes that he will not comply with them, must “be separated out by being placed in a closed hospital or in a closed part of a hospital”.

“Only the absolute Ultima Ratio”

The Leipzig Green Party politician and lawyer Jürgen Kasek also speaks to the MDR in favor of this measure, but with reservations: “And very important, that must be proportionate.”

The compulsory stipulation is a “very strong fundamental rights measure”: “Therefore, it can only be the absolute ultima ratio if all other possibilities have been exhausted.”

According to the station, several thousand people have been sent to domestic quarantine in Saxony, including 3300 in Dresden and 2100 in Leipzig.”

As the USA and China clash using the pretext of the virus, a former US marine colonel suggests the part-privatisation of warfare against the Chinese navy, including its merchant navy

“Privateering constitutes a once universally accepted but now thoroughly unconventional way of harnessing the private sector in war…The rise of the Chinese military has been well documented, but a few points highlight why privateering would be a useful element of U.S. naval strategy…China has aggressively expanded its global economic and diplomatic influence through its Belt and Road Initiative, but this expansion creates a vulnerability, as these investments must be protected….The Chinese Communist Party has told the people they will not have democratic institutions, but they will receive economic prosperity. China’s merchant fleet is large, because the cost to China of building and operating merchant ships is low, and its export-driven economy creates a huge demand. In 2018, China had 2,112 ships in its global merchant fleet and Hong Kong had another 2,185. In addition, China has a massive long-distance fishing fleet, estimated at 2,500 vessels…. Privateers do not need to be heavily armed, because they would be taking on lightly (or un-) armed merchant vessels, choosing vulnerable targets, or acting cooperatively with other privateers. Since the goal is to capture the hulls and cargo, privateers do not want to sink the vessel, just convince the crew to surrender. How many merchant crews would be inclined to fight rather than surrender and spend the war in comfortable [sic] internment?”

“This pandemic will lead to social revolutions”

A Bloomberg article showing some of the rulers’ fears, but it’s more useful for them than for us 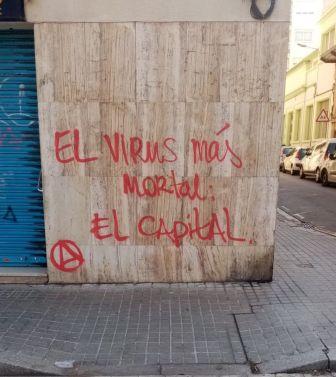 The most lethal virus: Capital

Technologists developing a virus “immunity passport” …follow up to “Gates suggests people be made to have a digital ID showing their vaccination status, and that people without this “digital immunity proof” would not be allowed to travel“

T says of the above: “Misleading and sensationalist report. What I saw (I watched the video of the event) is that the police were called to intervene in an apartment where two professors held a livestream lesson (apparently the neighbors complained of noise or something). What you see in the video is that one of the professors is arguing with the police, saying “welcome to fascist Belgium”, etc. (the livestream is still going, so all of the students can see what’s happening) and refusing to give his ID card. At some point the cops also accuse the professor of violating the social-distancing measures, and later when the professor says “Sieg Heil” – obviously as a cynical response to the police methods – one cop tells him that it’s an incitement to racism…”

It’s his own fault – he should have said “Sieg Democracy!”

Trump Has Emergency Powers We Aren’t Allowed to Know About

“A coronavirus lockdown in Liberia’s capital Monrovia got off to a chaotic start on Saturday, as some police officers used truncheons against residents who had ventured out into the streets to buy food and withdraw money. Confusion reigned across much of Monrovia, a city of more than 1 million people, with many having heard, erroneously, via social media that the government had ordered a 3 p.m. to 6 a.m. curfew rather than a full lockdown. Many residents voiced anger at President George Weah’s order, which they said would do more harm than good in a country where more than half the population lives in poverty. “Corona is not going to kill many people. It is hunger that will kill many Liberians,” said Jettroy Kolleh, a student, as he stood outside a bank in Monrovia where dozens of people had queued in close proximity to withdraw money…Liberia has so far confirmed at least 48 cases of the coronavirus, including five deaths.”

“Crozier was relieved of his command last week after sending a compelling letter on March 30 to Navy brass pleading for help dealing with an outbreak of the coronavirus on his ship at sea. The message, sent via a nonsecure, unclassified email leaked to the media. More than 100 of some 4,000 sailors on the ship had already tested positive for COVID-19 when Cozier sent the plea. Then-acting Navy Secretary Thomas Modly quickly relieved Crozier of his command for exercising what he considered poor judgment. Modly then took a $243,000 flight to Guam Monday to tell Crozier’s crew that their captain had been “too naive or stupid” to lead the ship. One sailor can be heard shouting “what the fuck” at Modly at that point in a recording of the speech that was leaked to the press. Modly apologized for the speech later that day — then resigned on Tuesday.”

Gates suggests people be made to have a digital ID showing their vaccination status, and that people without this “digital immunity proof” would not be allowed to travel

Amongst the half-truths and one-and-a-half truths there are some interesting genuine truths in this mix of conspiracy-theory-inspired political manipulation and partial medical sense and nonsense.

UK: Minister of Health, having had the virus, comes out after 6 days of confinement to cough and sneeze close up to people whilst opening a hospital

The last 4/5 days take the form of the original – ie comments in the comments boxes.

Increase in racist attacks in Israel:

On US death rates and youth hospitalisation rates – for ORDINARY FLU this winter/spring: