Please also note that some things here I’d modify given the almost 2 months since I started this. In the confusion of this unprecedented situation, you discover a great deal more tentatively playing around with ideas than playing the perfectionist with some blanket dogma that ignores all the nuances.

“Until recently, the World Health Organization (WHO) estimated the annual mortality burden of influenza to be 250 000 to 500 000 all-cause deaths globally; however, a 2017 study indicated a substantially higher mortality burden, at 290 000-650 000 influenza-associated deaths from respiratory causes alone, and a 2019 study estimated 99 000-200 000 deaths from lower respiratory tract infections directly caused by influenza. ” – here. This is not to deny the fact that this new virus is killing people in greater proportion to those who have it than the proportion of those who die from ordinary flu as compared to those who get it, but it gives some notion of the disproportionate level of alarm. Meanwhile deaths from malaria are also quite high – 405,000, 67% of whom were children, in 2018.

In France in 2009 swine flu became the pretext for an exercise in social control – with doctors forced by the state to vaccinate everybody fearing the disease who wanted to be vaccinated. Despite massive and continual state and media propaganda, less than 10% of the population took up this manipulated ‘need’ for a vaccine. The Minister of Health at the time, Rosalyne Bachelot, whose personal interests in the pharmaceutical industry were well-known, ordered 94 million vaccines from Sanofi Pasteur, GlaxoSmithKline, Novartis and Baxter International at a cost of around 900 million euros to the state. Most of the vaccines were never used. As a result of the vaccine, there were 21 deaths, 4 anaphylactic shocks, 9 Idiopathic thrombocytopenic purpura cases, 6 multiple sclerosis cases, and 9 Guillain–Barré syndromes. The illness itself killed about 100 people (though it’s hard to get figures).

Undoubtedly illness and disease are constantly used for ulterior motives which will invariably be dismissed as ‘conspiracy theory’ by interested parties. Often the state allows genuine problems (and certainly not only health-related ones) to develop to use a crisis so as to consequently crack down on potential revolt. This is not to ignore the obviously ridiculous conspiracy theories around the Coronavirus, whose effect is ultimately to make many of those who recognise the absurdity of many of these claims accept everything official ideology proclaims about it, since anything critical can be dismissed as some stupid conspiracy “theory”.

Which is why we should not forget that Wuhan – the centre of the Coronavirus – had a significant social movement in July 2019 which tentatively began to connect to the movement in Hong Kong ( see this, this, this, this, this, this, and this), which may be a factor in this exercise in authoritarian repression. And Hong Kong too is experiencing some minor elements of control as a result of this virus. In the face of the very tenuous beginnings of significant social contestation in countries throughout the world, fear of touching or proximity to others is another convenient factor in the intensification of social separation. Given the ‘spontaneous’ racism of many people, it doesn’t need to be deliberate policy for it to be exploited in such a way as to exacerbate already existing separations – such as racism towards anyone who looks Chinese (see, for instance, this).

Moreover, given the fact that the doctor who originally discovered this virus was arrested and accused of “rumour-mongering”, it’s hard not to speculate if the Chinese bureaucracy intentionally wanted this virus to spread. And perhaps conveniently blame the local bureaucracy in Wuhan of gross incompetence so as to get rid of rivals in the CCP’s internal battles. Sure, this is pure conjecture, and it implies that the State is omnipotent and invariably in control of forces that are often beyond its control. It would suggest that the CCP was capable of undermining its own global bid for world market supremacy (the effect of the virus has been to weaken Chinese capital) because of a greater threat of internal subversion perhaps triggered by the limited revolts in Hong Kong, and Wuhan itself. In other words, figuring out that reducing its capacity for capital accumulation in the immediate term was worth it in order to suppress the possibility of revolt. Possibly too many incalculable risks for the State to have proceeded in such a Machiavellian manner, though it’s still a possibility. However, it’s not really worthwhile going down this road of hypothesis-fantasy. After all, it’s how the state actually uses this “crisis” that’s important not tracking down the manipulations and manoeuvres that seem to be behind it.

Conspiracy “theory” is often just a way of constantly researching – and often inventing – “proofs” with the sole aim of proving something that’s largely impossible to prove without having direct access to the hidden secrets at the centre of Power. And almost invariably involves ignoring any evidence that may conflict with the conspiracy ideology: having decided dogmatically on the fact that a situation is a conspiracy, it would be inconvenient to look at anything that might run counter to such a possibility. In an age of confusion and uncertainty, conspiracy “theory” functions like other forms of dogma – as a way of affirming a fixed idea that seems to rise above the turmoil. In a world that’s utterly insecure, those on the absolute margin of existence seek out fixed certainties that substitute for confronting this increasingly chaotic world, that substitute for a more open ‘nuanced’ attitude towards people and ideas.

Conspiracy “theory” is usually an obsession which aims to sell the “theorist” as a particularly lucid opponent of political intrigue. Whereas in fact, it’s just a grandiose internet-fueled political version of what used to be seen as petty gossip. Substitute “Jerry’s sleeping with his ex-wife’s girlfriend” with “Xi Jinping hates Zhou Xianwang because…”. Just as in the past the largest section of society objectively reduced to being spectators of history – women – resorted to gossip as a form of manipulation substituting for direct ability to influence events, so nowadays there are many who essentially remain spectators who feel that they overcome their separation from history by spreading conspiracy “theories”. PS This – Will the coronavirus outbreak derail the global economy? could well become the official reason for an economic recession-cum-depression which was already predictable way before the Coronavirus “crisis”, the justification for further attacks on the working class. Homeopathic cure for the virus 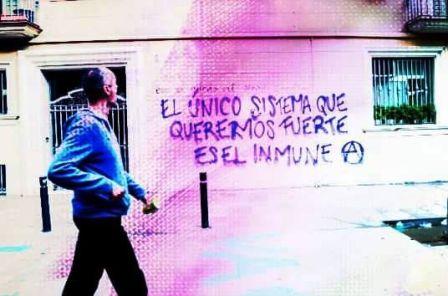